Inside Pitch Article by Jordyn Stuessy 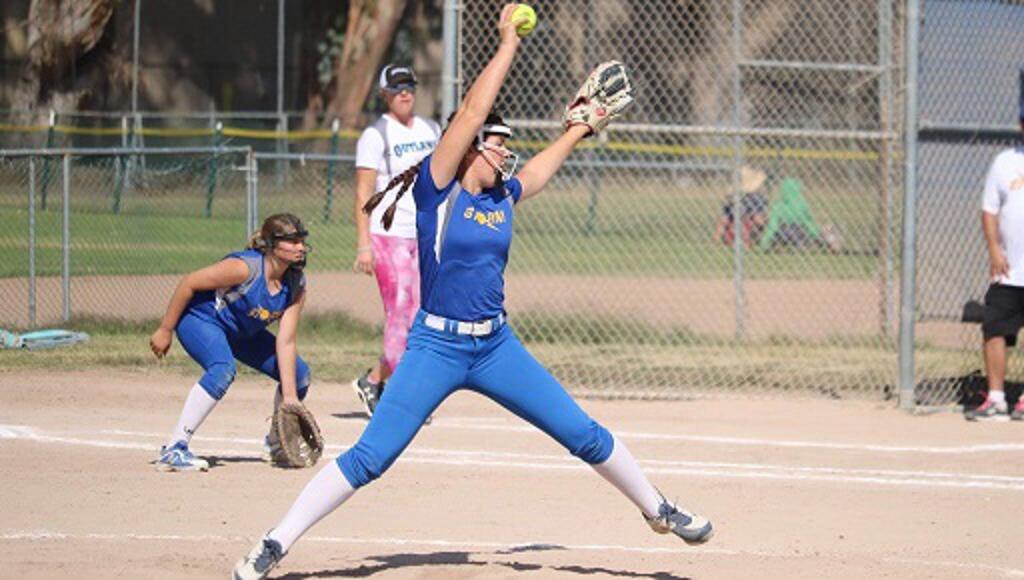 Jordyn Stuessy will spend her summer with the Salinas Storm, the club program Monica Abbott played for, but next fall the pitcher will begin life at a new high school with a new club team in a new state! Fortunately, it looks like this will be the last move for her military family.

Jordyn Stuessy is a right-handed pitcher for the Salinas Storm 14U Shay ‘06 team in California and we heard from her last November about what it’s like to a softball player whose father, Kevin Stuessy, is a Captain in the Air Force and has had five work-related moves in the last three years.

Make it six now, as the family recently found out where the next transfer will take them…. and it looks like it will be the final one.

Previously, Captain Stuessy explained:
“As I get near the end of my career, we only have one more move, in August 2020. Wherever we end up last is where Jordyn can finish her travel softball and start and finish her high school years.”

Here, in Jordy’s own words, are the details of where the family will be headed… and, as you’d expect, it’s a roller-coaster ride of emotions… and surprises!

Last time I wrote for Extra Inning Softball, it was a question of where we will end up as I’m preparing for my last season in California.  A lot has happened since my last article about life as a “Military BRAT” and where we may move to.

First off, my team finished strong for the fall and we were all very excited our assistant coach is now the head coach for our spring team: Coach Shay (Shayla Castaneda).  We added four amazing players and I am sure we will raise our level of play.

Just like any team, players come and go, but 10 of us returned and we are excited with our new teammates. I know we have a great team but the first few tournaments will be rough since we are challenging for a PGF Nationals bid. We took care of business against some friendly games but know the level of play for PGF will increase.

We will take our bumps and bruises at first- but be better for it and I can’t wait to start our push for PGF qualifications. To think this is my last season in California and how I would love to help this team and the Storm organization earn a second 14U PGF bid (‘05 9th graders already qualified) has been a goal from the start. And it started in this past off season.

The offseason/winter was long. There was a lot of conditioning, rest and recovery. Conditioning is a funny thing.  I dread it as I get close to the facility. Once there, I love it and feel great afterwards. It’s a break from fieldwork and pitching.

I even saw Monica Abbott a few times while working out at Alpha Sports where I do my conditioning and training. It’s where she was training in the off-season since she is from Salinas. Watching her workout was crazy… she is a beast! 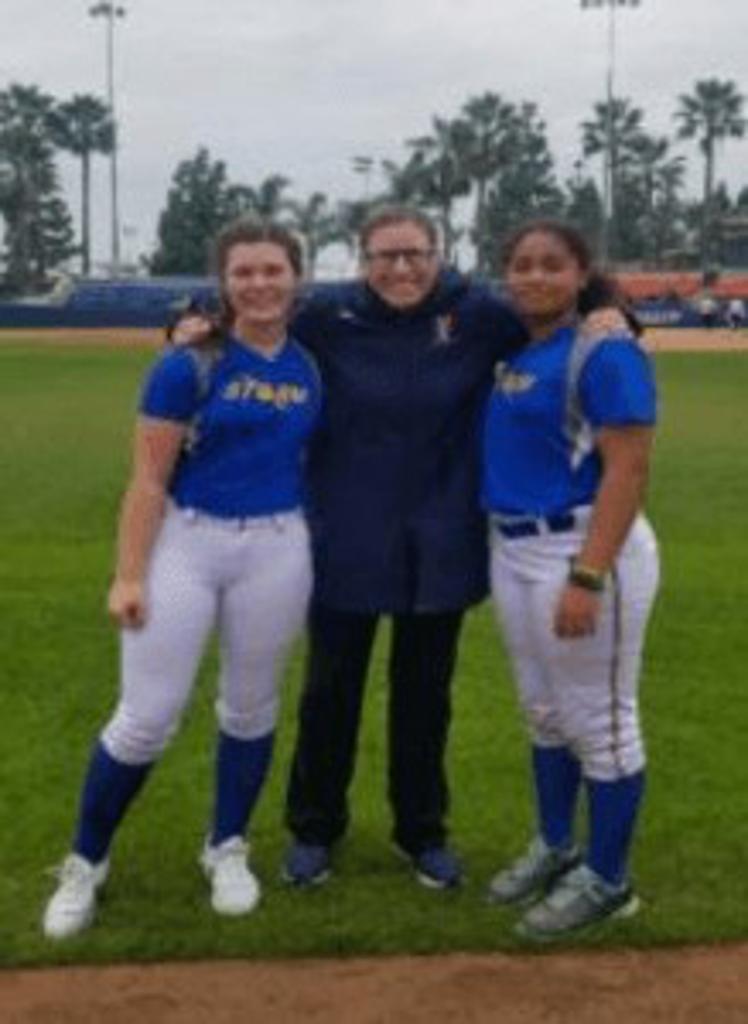 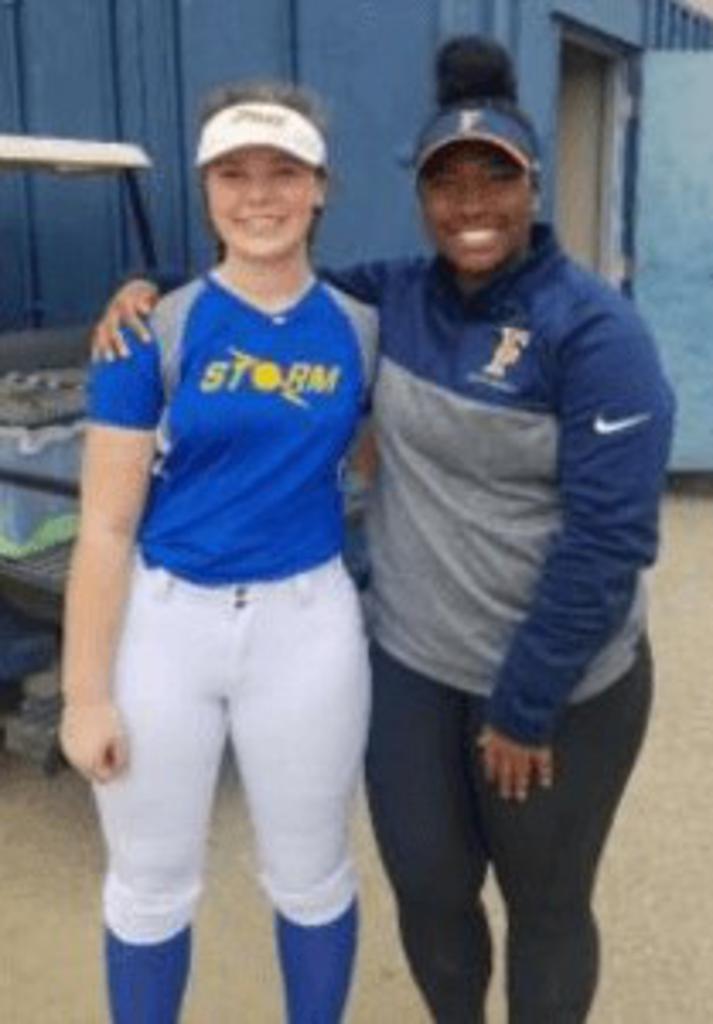 Jordyn with Coach Christina Washington after the Titans camp. She complimented me on my sound mechanics," Jordyn said proudly.

I was also able to attend my first Elite Camp with one of my catchers at Cal State Fullerton. It was great to no longer be lumped into the basic youth kids camp and start to pitch/play against elite prospects. I was routinely complemented on my mechanics and how good it was as well as my spin for my age.

I didn’t do bad but had a few nerves for sure. I know each camp like that will get me better and helps me feel more comfortable. The players/coaches were great with us as well as the older 16/17-year-old group. The camp and off-season conditioning helped be a distraction from the questions everyone was bothering my family with: “Where are you moving to? And when?”

As a military family with an upcoming move, everyone asks us (mainly our family) where and when we find out on our upcoming move. Family couldn’t wait for us to hopefully get back near to home. Teammates and their parents were asking to make sure I am here for the whole summer season.

It was a back and forth Q&A; it gets tiring, but I don’t blame them. They are just as excited, scared, and curious as we are, except we are living it! I have only known the military life, so this is somewhat normal:  a hurry-up-and-wait mentality, but my friends thought it was crazy I didn’t know where I was going in less than six months.

And here comes the stress!

About a month ago I was heading to practice when my Dad got the call, his face and tone went from excitement to fear to anger: our new destination: Minot, North Dakota!

I pretty much found out at the same time as him and it was an emotional ride in the Jeep to practice after that phone call.  He tried to spin it, look for the bright side and persevere, but this one was hard, I could see it and feel it from my Dad.

Complete panic! Then fear… then tears…then anger. It was a roller coaster for the entire practice I had that night. I didn’t tell anyone at practice, so it was my secret with my Dad until we got home. 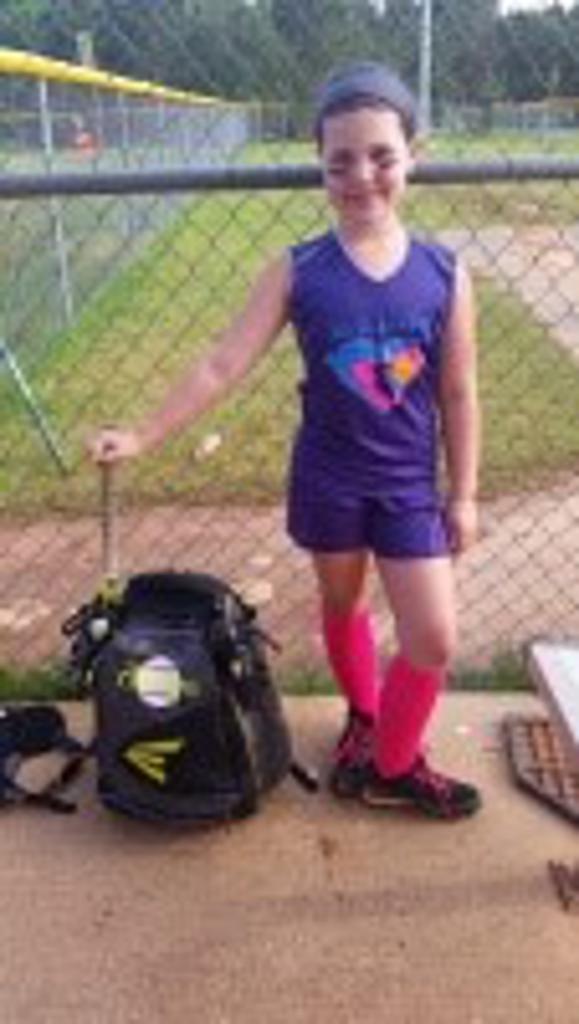 Moving all over the country, Jordyn played 8U softball for the Louisiana Heartbreakers.

I felt bad for him and I was trying to keep my tears inside so he didn't see houw much it affected me.  He was also at a loss for words.  After all, he had 10 locations spread out across the South and Southwest on his choice sheet like Oklahoma, Florida, Nevada, Arizona and Texas… and he got one hour from Canada!

All my years of softball and hard work and what will I do? I started to have more nerves and drifting thoughts about

what it’s like up there.  I already had nerves about going to a whole new high school, no matter where we go, but at least it would have been somewhere in the South near my family.

And a chance of softball and warmth! This put us nowhere near my family, and nowhere near warmth!  I talked about perseverance in my last article and this was definitely going to put me to the test!

My Dad had seven days to accept his orders or separate. This meant losing his retirement, benefits, and maybe no longer be military.

Many people think this is over-reacting to a location (probably people from North Dakota but it was a major decision for my family and he included all of us and was willing to do what his family wanted. He sat us down and went over every option about going to North Dakota or denying the orders and getting out.

Even though he was over 20 years in, he hasn’t completed his officer commitment and would be sacrificing retirement and then have to work in an emergency room or hospital as a civilian.

I didn’t want that. I like being a Military BRAT, it’s hard, but I know it takes a special mentality and I am proud to have it.

SUDDENLY… REDIRECTED TO A NEW BEGINNING

Then, on Day 5 of the seven-day deadline—and after countless daily conversations of discussing his options, we were “redirected” from Minot, North Dakota.  We landed in what is perhaps the best thing for me, family, and the military for that matter...

I cried again for the second time about this move, but these tears were for joy!

I know there is softball in North Dakota and very good teams, too, but I was nowhere near family. Now, with the combination of Texas, family, and a strong state with great softball down there (here I come Bombers, Blaze, Glory, Impact Gold, etc.!), we could not be happier. 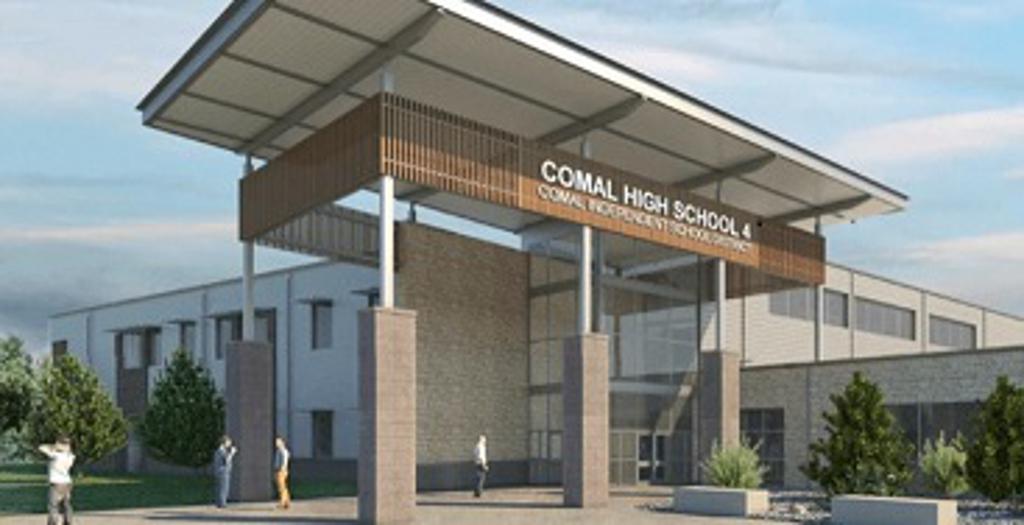 The only minor disappointment was not being able to go to high school with my cousin in Oklahoma; however, I am near grandparents, good schools and great softball!   know it will be so much fun for my final four years before I go to college and another exciting part is the high school I will be going to: Davenport High School in San Antonio, Texas… home of the Wolves. It is a new school set to open this August and I will be the first class to be there for all four years.

To establish the work ethic, standards and mentality of a program is very exciting for me. My Dad will show me highlights of Clemson softball and how they are establishing their identity now as a new program. That is something I will get to experience in the high school world. They (Clemson Tigers) have become my underdog team I root for and watch them as much as I can.

I think the best part is I know we can turn into a power program quickly. With Texas softball, I know the competition will be tough, but we will be ready. When we looked up the high schools around that area, we noticed last years’ state finalist team is next door to our school (Canyon High in New Braunfels, Texas)) and some of them might come over to our new school!

Who knows at this time, but it’s exciting! However, that is six months away and, for now, it is about my current teammates and softball this spring/summer.

LIVING IN THE MOMENT

These next five months are going to fly by so fast—they always do just before a move. You think about all the things you still haven’t seen (still gotta go to Yosemite and Alcatraz!) and want to cram it in.

It won’t get hectic until July. That’s when it begins: packing boxes, movers loading us up, living in hotels and temporary lodging while still trying to finish up the season. It will be a mental test, doing all this while our belongings are on the way to Texas and we’re heading to a place where I don’t know a single classmate. I will get there two weeks before school starts.

In the end, this crazy life of being a Military BRAT will be worth it. I know it is my last move, and my final playing location since my dad retires the same year I graduate high school.

I will update you again as we settle into Texas and how this past season went to include Texas tryouts, a new high school (literally!), and my crazy emotional goodbye to my Cali friends.

We have a really tough schedule but to be the best, you have to play and beat the best. As one of the pitchers on the team, I know the pace and tone of the team starts with my play and I have to start strong and make every pitch/moment count. I got this!

The Storm and Coach Shay have been so good to me and my family. I have gained so much as a confident player/pitcher and to represent them and get a second bid to PGF Nationals for 14U is a big team goal.

If we work hard enough and dedicate our passion for this game, I know we can do it!

And I can't think of a better way to leave California than in sunny SoCal with my teammates playing softball in Huntington Beach in August! 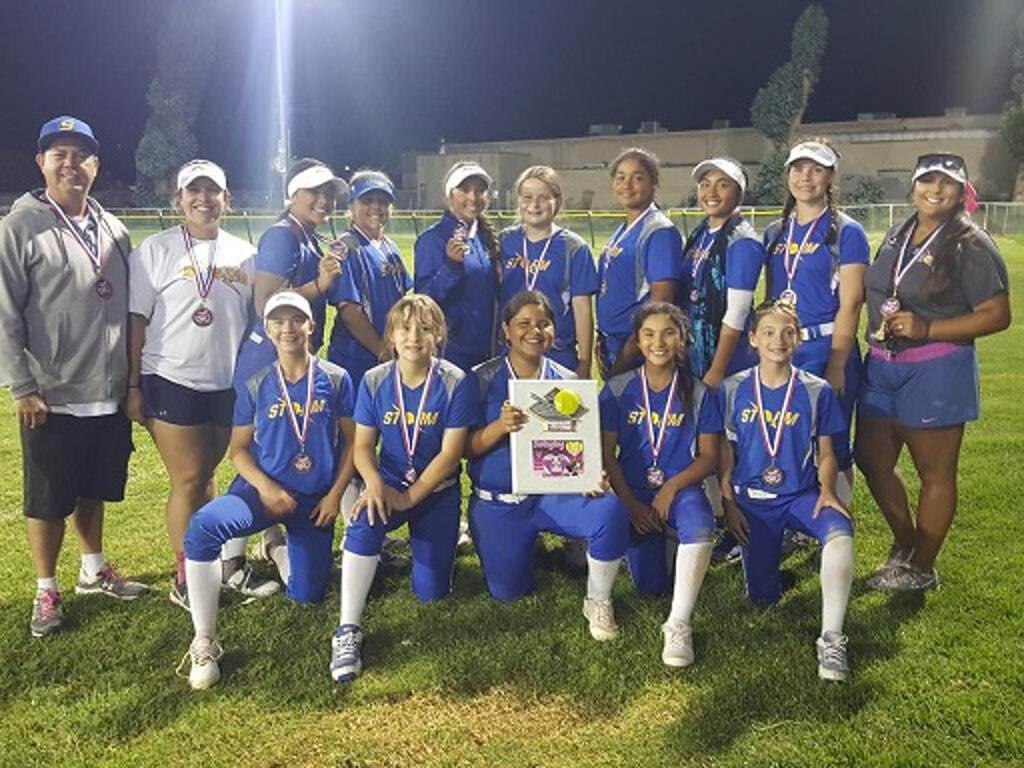 One of Jordyn's goals: to help her Storm 14U team get another PGF Nationals bid for the program.